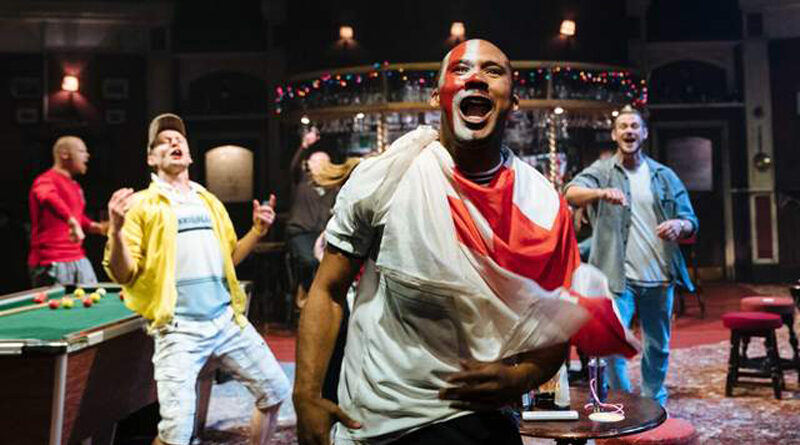 How times have changed. When Roy Williams’ Sing Yer Heart Out For the Lads premiered at the National twenty years ago it confronted left-behind despair and the targeting of Black players, all with the simmering presence of quiet-spoken far-right agitators and pub regulars including a detective constable, all to a degree complicit. 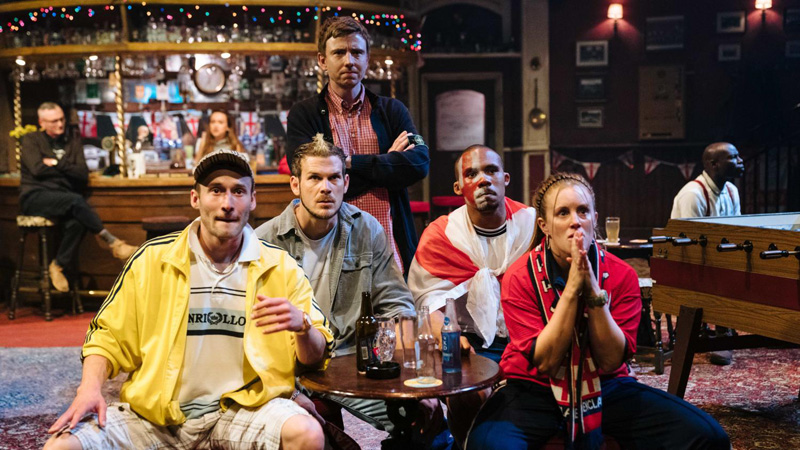 This outstanding revival, staged at Chichester’s Spiegeltent in 2019 by Nicole Charles, is now directed by Joanna Bowman at the Minverva. With Joanna Scotcher’s simulacra of a pub – even the exterior areas  blazoned with King George and bunting – its (fully working) bar, cracked tables, bar stools, bar table, table football and audience encouraged to play both in the interval (they’ve brought the kit too), this takes the production to a new level.

A fourteen-strong cast, many returning from 2019, are introduced in a masterly exposition that sets everything up, including ultimate protagonists. It’s Gina’s pub, and Sian Reese-Williams’ presence threads and controls everything with a mix of watchful matriarch and nonchalant sexual assurance. Gina’s determined there won’t be trouble with racists, but when teenage son Glen (Jem Matthews, an assured debut of hunch, flinch and panic), ever anxious to prove himself, gets set on by one of his two Black friends (Duramaney Kamara’s edgy, volatile Bad ‘T’, Harold Addo’s more conciliatory Duane, a memorable, balletically fast duo) she reveals fissures opened by her own father Jimmy, who as portrayed by Steven Dykes mixes avuncular bonhomie with an easy scale of racism. 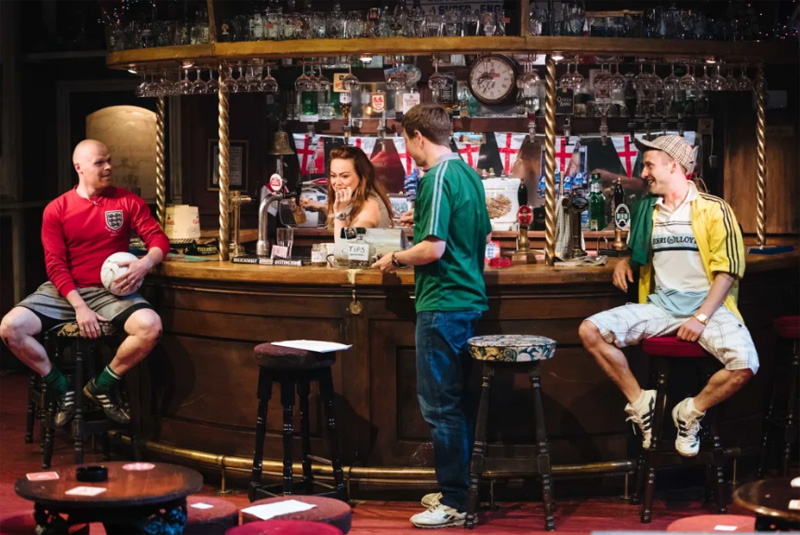 Bad T’s actions rebound on Duane, and it’s his mother Sharon’s contained fury whose appearance and shameful arrest at the climax of Act One that shows just how superbly crafted this piece is. Jennifer Daley’s brief appearance is telling, never raising her voice she conveys Sharon’s lightning-rod for pent-up racism, that’s to anticipate.

Williams ratchets up tension introducing characters just when we’ve assimilated the last. Mark Springer’s character Mark though walks by himself. Having just left the army, and dumped by Gina for his friend Alexander Cobb’s Detective Constable Lee, dumped in his turn and now engaged, Mark’s only there because he can’t face his father’s decline any more than his overly-credulous, enthusiastic brother Barry (Makir Ahmed), over whom he’s nominally keeping watch.

It’s a telling contrast. Williams invites us to see how military or police service bonds people, engaged in lawful suppression of violent energies. But what happens when this goes awry? Springer’s Mark exudes compromised authority. He’s quit the army for a reason; that burns in him as he negotiates tripwire after tripwire like landmines. The way he swerves a refusal to engage at times with provocation or plea is telling.

Ahmed too exudes a larky, desperately identifying young man without the heft of army cache, but hero of a local football team, shows Barry wants to impress his brother and everyone, wrapped in his flag. This  includes what he’d do to Victoria Beckham when Beckham seems to be losing the plot on-screen. Everything’s a notch too far. He’s like an electron running round his brother’s nucleus. Waiting to fly off.

You’d expect Cobb’s Lee to appear alone, but he doesn’t; it’s a pointer.  He’s alongside two more hapless individuals – Samuel Armfield’s sparky yellow-clad Becks who fitted the pub televisions ineptly and later has a thing with Kirsty J Curtis’ laddish Jess, with her own edgy racism, in her own way lad-pleasing but too quick with all the wrong words in a consummate shoutiness. Rob Compton’s hangdog Phil with his Beckham haircut has a thing for Gina. ‘Stop looking at my tits’ seems a jokey litanic putdown, but when he’s injured, Gina declares he has a funny way of finally declaring attraction. It’s fleeting, but you see why she’s rejected two solid men for being boring. And what that says about adrenalin fixes. 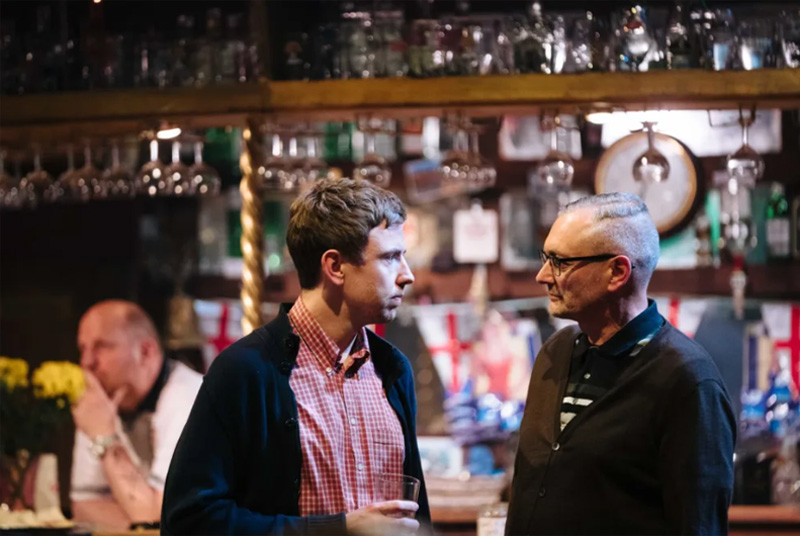 Cobb’s Lee is the liberal-ish, soft-spoken admonisher you’d expect, but stabbed by a Black man his own friendship with Mark’s compromised by his next actions; significantly they make it up when a shared offstage danger threatens the peace. Springer and Cobb bring the alert, quietly-coiled training of professionals to both actions and talk. But they can’t control everything, and their inability to disengage from the melee has terrible consequences.

With a cast of fourteen, Williams can’t place many extensive conversations, but this pair have one and both Mark and Barry accept bouts with Michael Hodgson’s Alan.

As played by Hodgson, Alan is a sinister creation. Williams is scrupulous in showing how people like him – reasonably well-off – come to hold such views, just as he is of others drawn in and out of a raging despair successive governments don’t address. “If you want to stop people being like me, then you are going to have to start listening to people like me.” Williams agrees with Alan here if nowhere else. Brexit, red walls, sneers of metropolitan elites show we learn nothing.

Other racists are adrenalin-filled, like Lee’s brother Lawrie, hopelessly lost, with some psychic Philoctetes-like stink of a wound in Richard Riddell’s outstanding performance. A man with palpably low-self-esteem, exacerbated by his smart brother’s success and desperate to belong to something that tells him why he’s lost. Riddell threatens to go off every time he crosses the stage.

What fuels eventual catastrophe is the pub’s ambient toxicity, and though condemning Lawrie’s uncontrolled racism, Alan who’s recruiting him for his far-right organisation knows where muscle comes from. But for very different reasons to brother Lee, Alan can’t control Lawrie either.

Alan dismisses the Sun’s slogans, exhorting Lawrie to read far-right books; not that Lawrie’s listening. The kind now propagating cultural Marxism (hommage to Goebbels’ cultural Bolshevism). There’s cruder versions of the current Great Replacement Theory – not as well-dressed as it would become. Hodgson’s reasonable tone, his shrewd reeling-in tactics, his sibilance are the most chilling things on stage. When Alan plays Barry, encouraging him to support the local team he was born near, he twists with a flick tailored to discomfit.

He can’t though do this to Mark who’s equally well-read and beats Alan every time. It’s not a long argument as pub ones go, but when someone claims you’ve already lost, they talk of themselves. Springer and Hodgson confront each other like tired angel and battered devil. It’s the electrifying conscience of this play.

The denouement though shows how superbly Williams envelops his structure with key pointers. You feel Jez Butterworth might have learned something thing in his own denouement to The Ferryman. It’s even more convincing here.

This is Williams’ masterpiece so far. His marshalling of such tightly-calibrated characters, each with their racist breaking-point, each with damage to bring to the fight, has rarely been so orchestrated. The staging this time invites our complicity too. If we’re not part of the solution, if we stand back with liberal white noise, then we’re collaborators. Outstanding. 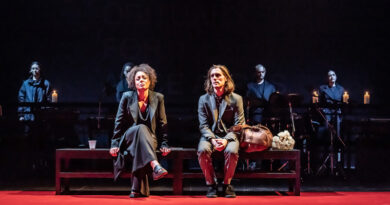 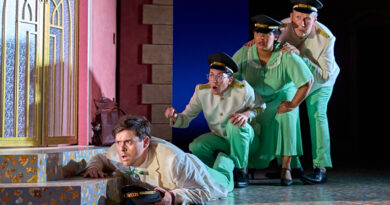 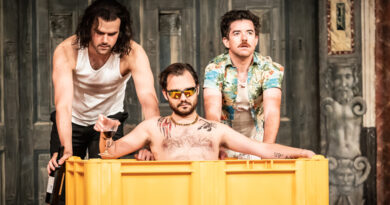