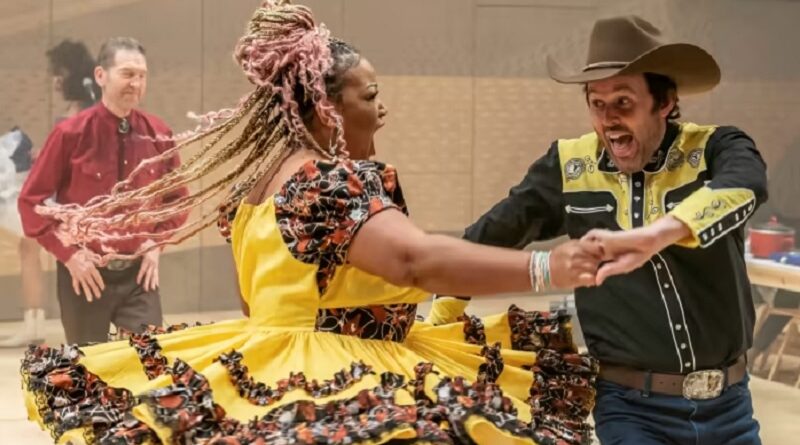 An unusual Skidmore Ranch this one; Jud Fry not only looks like Kurt Cobain but may be actively impersonating him, and unless I’ve misinterpreted principal director Daniel Fish’s approach, he’s suggesting that in Jud (Patrick Vaill) and Curly (Arthur Darvill) we are to some extent watching alter egos within the same person. 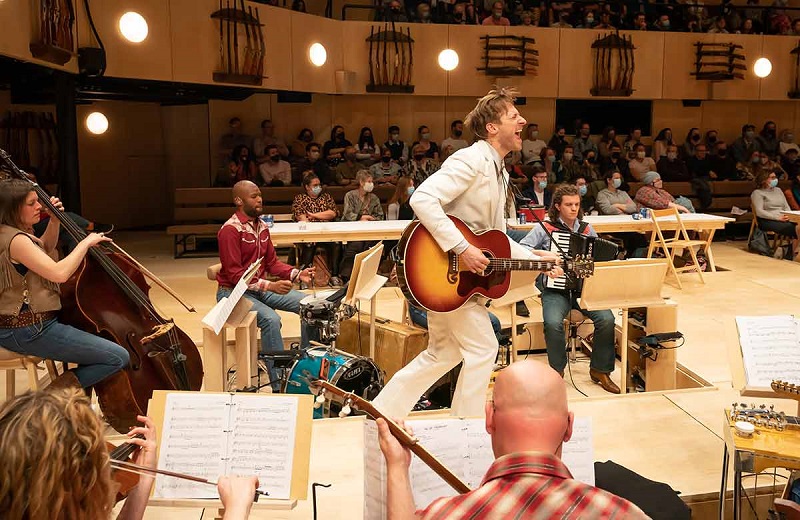 The premiere of Oklahoma! was 79 years ago and if Fish (known for conceptual experiment) isn’t allowed to attempt a radical rethink of this classic then we’re in a sterile creative environment. Traditionalists may have been shocked but there is much to admire here. The anachronisms of placing the piece in the present day but preserving references to the signature horse-drawn buggies, manual farming, and Oklahoma still being a “territory” rather than part of the Union become a complete lack of logic. But a capacity audience seemed so impressed by the quality of acting and singing, as well as the chutzpah of the endeavour, that I’d wager they were won over.

The production (with a different cast other than Vaill and James Davis as Will Parker who were original members) comes to London from a 2019 run on Broadway where Fish won a Tony for best direction of a musical. There is additional direction for this Young Vic version by Jordan Fein. 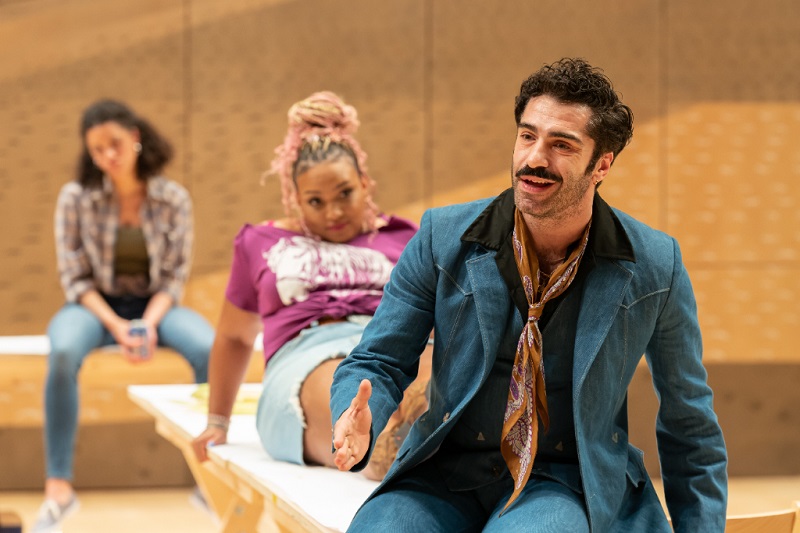 We get off to a flyer (as we always should) with Arthur Darvill as Curtly giving us a subtly modulated bluegrass version of “Oh, What a Beautiful Mornin’” to his own guitar accompaniment. He is wholesome, not a lothario, but you feel that in his dapper white leather outfit, Laurey (Anoushka Lucas) has a more streetwise admirer than usual. They are a credible couple; both actors are great listeners, and you can see their respective cogs whirring as the threat (and attraction) of Jud grows and recedes through the plot. Lucas often teeters wonderfully between tomboy and coquette and illustrates a true arc of development in her character. The pair combine well for “People Will Say We’re in Love” with its combination of coded flirtation and warnings to be discreet.

The audience is placed in a traverse configuration with the two ends being used for entrances and occasionally for video projection. Joint set designers Laura Jellinek and Grace Laubacher cover the entire performing area (and even the floor beneath the audience’s seats) with plywood, and its use on the walls suggests a mural or even a diorama in which we can see a broad sweep of land and other ranches as etchings. For once we can even imagine that we might be seeing the neighbouring farm where Jud, thwarted as usual in love, probably started a fire. Of course, this is the kind of thing you can do at the super-adaptable modular Young Vic which I have seen transformed into everything from Robben Island prison to a submarine. 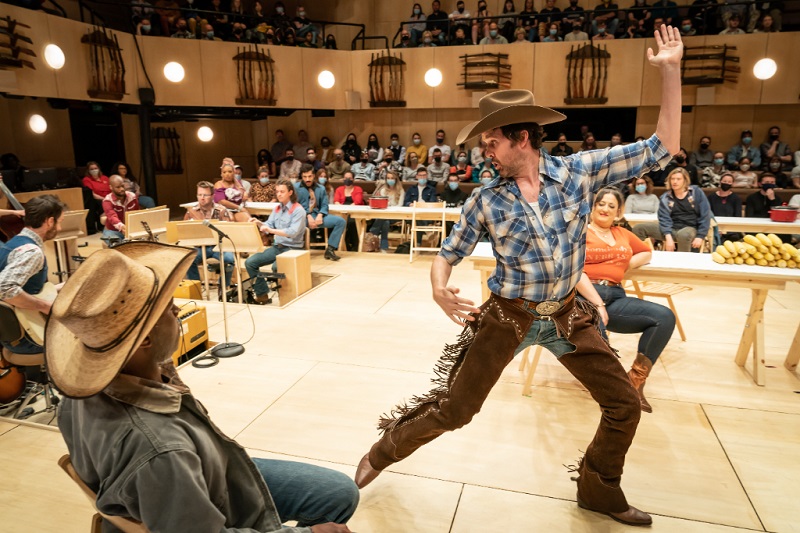 There is an eight-piece onstage band (no orchestra pit) and I was struck by the repeated brave decisions regarding arrangement and instrumentation made by Daniel Kluger and Tom Brady. As Ado Annie, Marisha Wallace sings “I Cain’t Say No” straight until a final refrain when she goes into pure Nina Simone-inspired gospel.

The presentation is so fluid (Darvill playing the guitar contributes to smooth transitions) that many songs flow promptly back into the libretto which means our appreciation is delayed and becomes pent up. When an occasional break allows the applause to release, it comes in a cascade. Oklahoma! was celebrated as soon as it came out for having songs that propel rather than slow down the plot and London director Fein’s handling of Darvill accentuates this. Curly may be a little over-fond of his vibrato, but the cast are all fine vocalists and nobody here sings like a bullfrog in a pond. 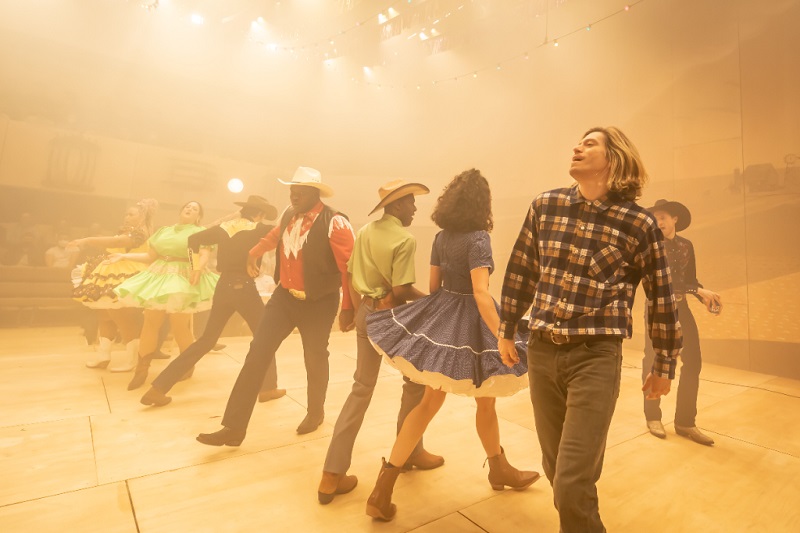 Dozens of Winchester repeater shotguns surround the stage and Fish has said in interviews that he wants to portray a community that not only fears strangers but thrives on that fear. Vaill’s morose manner and flaxen locks place him in this category and the line “Territory folks should stick together” is surely aimed at him. There is not so much as a square inch of gingham in sight, and costume designer Terese Wadden puts the women in taffeta, crinoline, and silk. The denim on show has chic designer lines.

Liza Sadovy finds little light and shade as Aunt Eller, making me pine for Josie Lawrence’s comedic excellence in the role at Chichester three years ago. Sadovy is formulaic during the hamper auction and positively wooden during the mock trial. As participants at the box social, we are in bright shared light for much of the action. Lighting designer Scott Zielinski injects an effective psychedelic quality into Laurey’s dream-dance sequence performed by Marie-Astrid Mence.

The stage is more or less blacked out for much of what is usually the sinister comedy of the smoke shack scene, and Fish uses live video projection of the face-off between Jud and Curly with Will Parker wielding a camera in the gloom. You would associate this with Ivo van Hove, but Fish is a free spirit and would never be merely imitative; he must have decided it was the best technique. His treatment of the scene is logical insofar as if this is a conflict between two aspects of the same person, we should predominantly hear rather than see it.

There is nothing saccharine about the production; Gertie Cummins’ laugh is there but it’s the malevolent cackle of an embittered alcoholic and Rebekah Hinds frequently follows it with a swig from her hipflask. As Will Parker, Davis extracts rare comedy from an underwritten part and for once his account of the trip to Kansas City (accompanied by much pelvis thrusting as he recalls his exploits) has some colour and his soft shoe shuffle is beguiling. There is great support from performers in minor roles such as RSC stalwart Greg Hicks who instils abject fear into anybody who takes liberties with his daughter. “I resolved to marry her when I saw the moonlight shining on her father’s shotgun.”

Rodgers and Hammerstein were known for being the supreme experimenters of their day, constantly stretching the boundaries of their chosen form. I certainly wouldn’t want to ventriloquize for them but, if pushed, I’d say that they would approve of this. There are significant faults but many a blue moon will shine before I see anything so daring and pulled off with such aplomb. 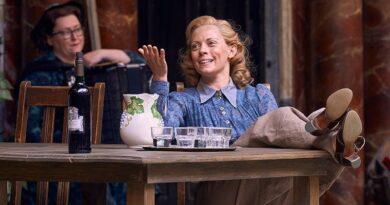 “Much Ado About Nothing” – Globe Theatre 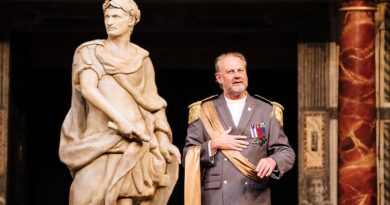 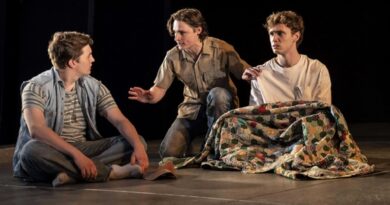