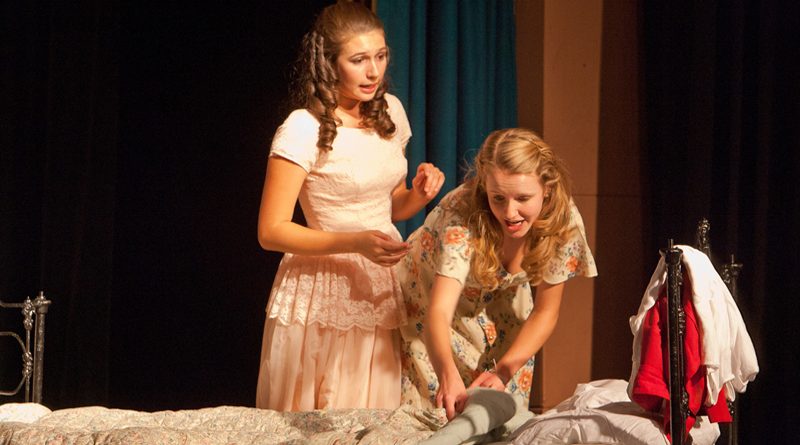 Site-specific theatre is among the most modish developments in UK drama with numerous companies courting avant-garde audiences among the theatrical intelligentsia. Jeremy Malies discovers a deeper-rooted use of the form that is an integral part of life at a council housing estate in west London.

Kensal House is a Grade II listed Art Deco building of 130 flats in Ladbroke Grove within the Notting Hill area. Built in 1937 by pioneering designer Maxwell Fry, it was one of the first examples of modernism in domestic architecture and an early experiment in communal living.

The newly-refurbished recreation areas are now home to the SPID Theatre Company. The acronym stands for “Specially Produced, Innovatively Directed” and thus artistic director Helena Thompson is making made bold claims. But with an Edinburgh Festival Highlight Award, a Fringe First nomination and a National Theatre writer’s bursary under her belt, she has already proved a critical success and showed an original vision across wide-ranging subject matter.

Plays International & Europe visited Kensal House as the company prepared for Superhuman, a show in which performers portray estate residents with similar backgrounds to their own who are mounting a hip hop show.

Thompson makes emphatic but justifiable claims that her work is innovative and has coined the phrase “site specific naturalism” for the manner in which she and director Rachel Grunwald stage her scripts. “People occasionally mistake our use of ‘naturalism’ for something risqué when what we mean is that we’re setting the plays in one place and inviting the audience into that space. It’s the job of myself as writer, together with the team who stage the play, to bring the performing space alive all around the audience, either by promenading them through the building or making the seats movable. We treat the location as one of the characters in our story.”

The company’s work is characterized by strong plot lines, and unlike many site-specific practitioners, the projects are based on crafted narratives relying on conventional stage management skills rather than pyrotechnic installations. Helena continues: “The abiding principle is that everything you see has to be real. If the play is set in a run-down council flat then that’s the venue you view it from. If the plot concerns ghosts then we will do everything we can to convince our audience that the performance area is haunted.”

SPID is the only site-specific company to focus on working with young people and Helena is quick to acknowledge that when teenage actors join SPID’s Kensal Youth group they usually have far more rapport with film than live theatre. “Some of the kids talk about our plays as ‘living films’ that happen all around them. Similarly, our audiences are hungry for a gripping story but may not be familiar with the idea of sitting in an auditorium and looking at a stage.”

Since 2003, SPID has been alternating shows in which the principal performers are professionals with plays cast solely from local residents. Thompson is skilful at adapting classic material and playful in her handling of narrative. She delighted many with Lear in which Cordelia is a would-be journalist on work experience, her father a newspaper proprietor and Edmund a scheming sub-editor. Helena elaborates: “The youth plays are usually based on issues that we work with in a social setting while the professional productions are influenced by my favourite texts and in Open House I drew on Chekhov’s The Cherry Orchard.”

Pointing to children of varying ethnicity playing in front of a mural depicting Maxwell Fry, Helena stresses that the theatre company embodies everything the architect believed in. She continues: “Fry knew that architecture could improve quality of life for people on low incomes and he was convinced that a sense of community could be fostered by the right kind of building. But he was working in an era when people had more faith in social housing and modernism than they do now. One of the things that sustains us is that we’re confident our work honours Fry’s modernist vision by making this community more cohesive through the arts.

“When SPID set up here there was no group ethos among residents, a shortcoming underlined by the fact that the recreational areas had been neglected for years and never used fully. One of our volunteers said she felt like Alice as she worked her way through a warren of disregarded rooms that were covered in mould.”

“Open House had already won awards at Edinburgh and received marketing support from Riverside Studios, so when we staged it at Kensal House the residents realised not only that there was potential in the resources here but they could be an active part of them. Something I’ve always loved about stories set in one location is that they invest the performing space with power. If you’re going to jump around and shift settings you might as well write a film. Of course ‘site specific’ is an overused term at the moment but I distinguish SPID from groups who use a location as a blank canvas where they mount an event. The true form needs to use the space so that it really gels with the play.” (In Superhuman, Thompson achieves a mini coup de théâtre when one of the young hip hop organisers leaps into the performing area from a skylight to the backdrop of genuine noise from the estate playground. The location has suddenly become a character in the story line.)

Despite consisting of only 130 flats, Kensal House contributes a large proportion of the performers. Other actors come from the neighbouring Rootes and St Charles estates. The catchment area includes Dalgarno which is often referred to as ‘the forgotten North Kensington’, a neighbourhood between Ladbroke Grove and Little Wormwood Scrubs.

Thompson describes her charges: “They come mainly from not-terribly-wealthy backgrounds.  Few have had much contact with traditional drama when they arrive and proscenium arch theatre often strikes them as elitist and remote.” The performers are aged 13-19 and while there is no targeting of particular ethnic groups the makeup tends to be a third black, a third ethnic minorities and a third white, this being consistent with the population of estates over the whole area. A simple injection of confidence or improvement in literacy and social skills are often the result of a youngster’s time at SPID. The actors are never forced to project [in the general sense], and the task of developing a real character communicating in their own idiom soon proves empowering rather than intimidating.

Disturbed at seeing young people becoming disengaged from live theatre, Thompson has resolved to give SPID members a sense of ownership over the form. Thompson is intent on writing dialogue that her performers would use in their everyday lives. She will often take a tape recorder into a workshop session, study conversations and return with a draft that the actors can comment on and work around. This method is similar to that of Mike Leigh who is known to set out a basic premise for his performers and let them explore their characters. A Cambridge graduate who has also followed the Birmingham MPhil course in playwriting under David Edgar, Thompson has impeccable academic credentials. She is consummately modest and initially bridles at the comparison with Leigh before admitting that her working method is similar.

“Your story needs to be born out of the people who are performing it and that’s at the heart of what I do with Kensal Youth even to the extent of props being a natural part of the performing space. The actors use language they are comfortable with and this means that they need to be involved with the characters as I write them. If my first draft of a piece of dialogue doesn’t strike the right note they will tell me how something might be rephrased. I’ve learnt not to be precious and appreciate how improvisation during rehearsal can mean you end up with authenticity.”

Having worked on many promenade productions, Thompson enthuses about casting her audiences as leering voyeurs. There are parallels with Fiona Evans’ play Scarborough. In its original form, Scarborough depicted a 30-something female teacher embroiled in an affair with her 15-year-old male pupil at a tacky seaside bed and breakfast hotel. Audience members who were uncomfortable in every sense, knelt or perched on sideboards and mantelpieces, literally inches away from the action. Subsequently, at the Royal Court, a second act was introduced and the same dialogue was performed by another couple, this time the teacher being male and his pupil a smitten girl teetering on the age of consent.

Helena draws a comparison with her own work, Open House, in which the audience is also made to feel uneasy in the role of guests at a party to which hardly anybody turns up. “The theatre-goers feel awkward on behalf of the actors, something that companies like Punchdrunk and Shunt do very well with their own site-specific work. In our youth play Michael we brought the audience into the psyche of the main character, a boy trying to get over the suicide of a friend. His thoughts are relayed by audio speakers throughout the performance area. The theatre-goer is cajoled into not only witnessing but inhabiting grief. Similarly, in our current show Superhuman, we mess with the audience’s expectations by wheeling them around the basement of Kensal House so that having been in front of a conventional stage they are suddenly positioned as voyeurs while the performers are arguing. We’ll never let the viewer remain complacent about his relation to the action.”