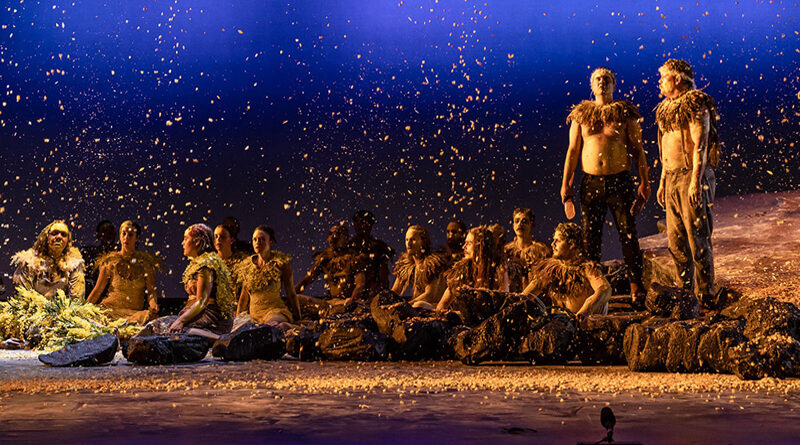 Ben Brooker at the Festival Theatre and Dunstan Playhouse.

Wudjang: Not the Past
Bangarra Dance Theatre and Sydney Theatre Company
Festival Theatre

Since the reopening of the theatres after two years of the Covid-19 pandemic, I’ve been thinking about what we seek from live performance. Now that we are beseeched to “live with the virus”, we gather nervously in reduced-capacity auditoriums, masks hugging our faces, hoping for… what exactly? The question seems a particularly vexed one at a time of multiple, intersecting crises both humanitarian and ecological. In their shadow do we seek transcendence or transformation from our art? Release? Social capital? Or, under the circumstances, could we be faulted for simply desiring what the British theatre-maker John McGrath liked to call “a good night out”? 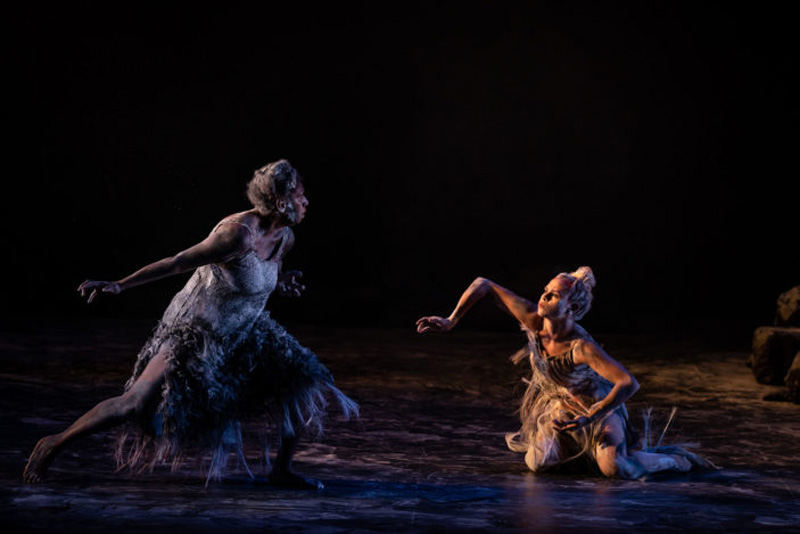 Elma Kris and Lillian Banks in Wudjang: Not The Past. Photo credit: Daniel Boud.

Just as McGrath was, Stephen Page – director, choreographer, and co-writer (with Alana Valentine) of Wudjang: Not the Past – is animated by theatre that combines social purpose with popular appeal. Artistic Director of Bangarra since 1991, Page has helmed landmark, and increasingly ambitious, productions for the Indigenous contemporary dance theatre company, including the popular and critical success Bennelong. His final major work before longtime Bangarra dancer and choreographer Frances Rings takes over is Wudjang – the word means “mother” in Yugambeh, the language of Page’s father – a “contemporary corroboree” that mobilizes Page’s distinctively forceful yet humane performance language towards a new sense of scale.

The performance begins with the houselights flickering unsettlingly before the audience is plunged into pitch darkness with, we soon have reason to suspect, the sound of a mining charge going off. Gradually, Nick Schlieper’s stage lighting brings into focus two monumental structures. One, a flat, elevated slab of rock, rises sharply above the surrounding stage area. The other, a massive bucket-wheel excavator of the kind used in open-pit mining, overhangs “empty” space, its monstrous teeth slowly rotating. A men’s chorus greets us full-throatedly, intoning “metal mouth digging” over composer Steve Francis’ industrial thrum as violinist Véronique Serret promenades among the performers, slashing at her instrument.

We learn, partly through lyrics sung predominately in English (the spoken word passages consist mostly of untranslated Yugambeh language), that workers have uncovered human remains while excavating for a dam. A Yugambeh man, Bilin (Kirk Page), talks his colleagues into letting him keep the bones, which belong to Wudjang (a remarkable Elma Kris), the titular ancestor who yearns to be reinterred according to custom. In her unquiet death, Wudjang is accompanied by a young “companion spirit”, Gurai (Lillian Banks), their bodies, daubed in ghostly white clay, often entwined like a single entity throughout the performance. 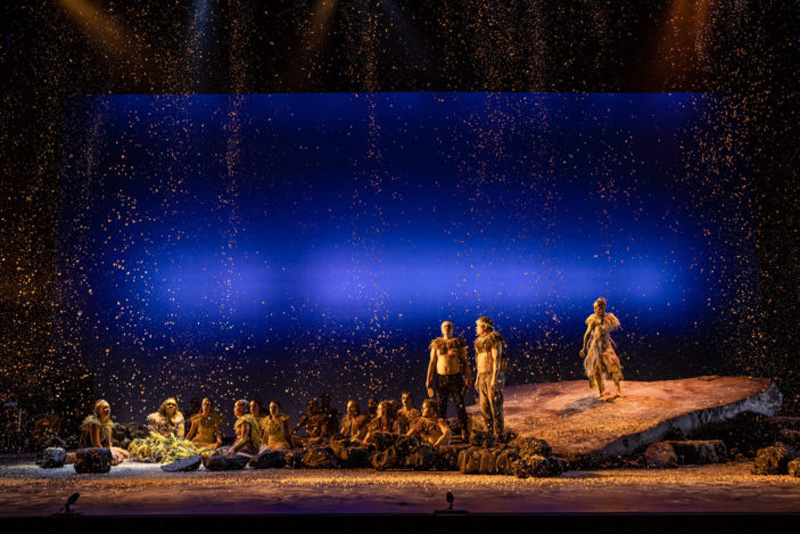 The ensemble in Wudjang: Not The Past. Photo credit: Daniel Boud.

In the more or less self-contained vignettes that follow, the historical and continuing violence of colonization is explored both mournfully and with a coruscating anger. In successive scenes, invasion is rendered as farce, red-faced colonizers hollering a parodic Anglo folk song beneath a washed-out Union Jack, and bleating dancers in sheepskins leaping and scurrying incongruously across the stage.

The most powerful scenes, however, are those of a darker register. In one, a sort of macabre ballet that recalls the 1857 Nerang River massacre, corpses are flung onto an ever-increasing pile as Wudjang howls disconsolately. We later learn just how cheap these lives are under the Empire’s genocidal subjugation: five pounds for each adult, two for each child.

But Wudjang is not merely a catalogue of the horrors of colonisation. The show’s second half is dominated by scenes of resistance, bookended by the creation of a literal black sheep to seed discord among the invaders’ flocks, and a song in which a Yugambeh woman (Elaine Crombie, extraordinary in dual roles) sings of “destroying men who rape”, avowing that white people will be made to pay for their violence. Finally, Maren’s rage gives way to a provisional healing, acacia leaves drifting onto the stage as Wudjang is restored to Country in a moving ceremony. “We will never leave”, the ensemble sings defiantly.

Francis’ score is musically omnivorous, drawing on everything from the blues, folk song, and the murder ballad tradition to Indigenous chant and a kind of plaintive contemporary mode enriched with live piano, electric guitar, and percussion. Page’s approach to directing is similarly maximalist, and the result is a show that at times can feel overburdened both formally and thematically. 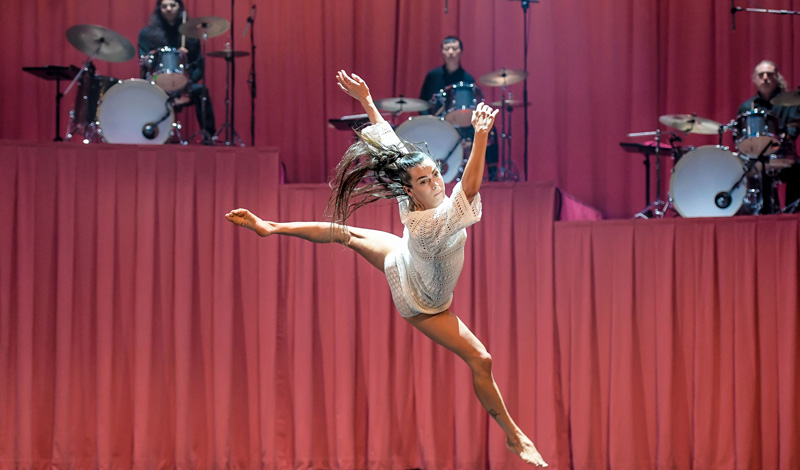 What lingers most in the mind, though, is the immense skill of the large ensemble, and a powerful impression of catharsis, of having been moved beyond the platitudes of reconciliation-speak towards something rawer, both more searing and, ultimately, more redemptive. A more boldly programmed festival might have opened with this work rather than yet another operatic trifle from Europe, placing this country’s unresolved colonial trauma at its heart where we might begin, truly, to restore the nation’s harmony in the way Wudjang ultimately gestures towards.

Which is all far more than I can say for Stephanie Lake Company’s Manifesto, which somehow managed to turn a promising departure point – nine live drummers paired with the same number of dancers in a “tattoo to optimism” – into an hour of pointless indulgence that felt far longer, so bereft of ideas was it.

The drummers, seated behind standard four-piece kits, are arranged on ascending risers against a backdrop of salmon-coloured drapes. The dancers, costumed in white trousers and black

suspenders, initially sit below them, the combined effect redolent of a 1950s big band performance, or perhaps a scene from a Busby Berkeley musical. Like Wudjang, Manifesto also begins with a bang, the drummers playing a single, shocking note in unison as the dancers respond in kind, jerking their bodies into the first of many tableaux.

What follows is a show that resembles nothing so much as an elaborate game of musical chairs. When the drummers perform Robin Fox’s score – sometimes taking it in turns to briefly solo, sometimes breaking into a cacophonous rock beat en masse – the dancers move exuberantly, incorporating an eclectic range of choreographic styles from contemporary to ballet, to various kinds of free and street dance (occasionally this is reversed so that the performers move in the spaces between notes). 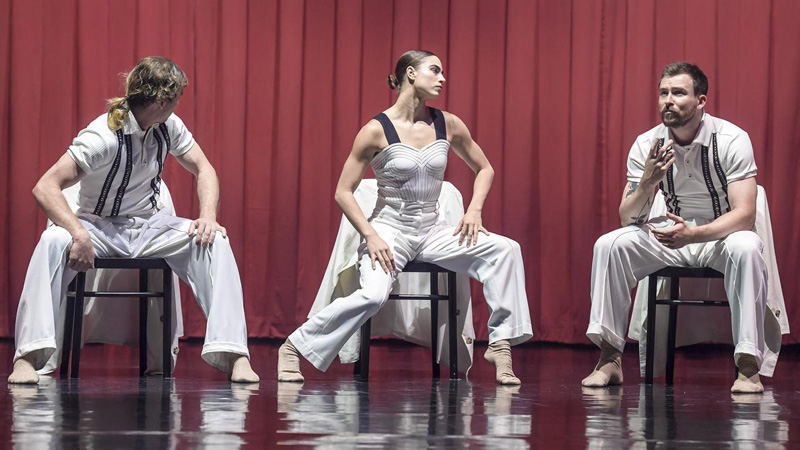 Lake attempts to inject some dynamism into all this, for example by slowing the generally frenetic pace down here and there, and in one or two parts having the drums electronically treated so as to produce some refreshingly ethereal sounds. But if there was a point to any of it, or any real dramaturgical progression except towards a sort of generalized chaos, it escaped me, even after scouring the program for any hint as to why Lake might have chosen a word freighted with purpose as the title for such a hollow, aimless spectacle.

It’s curious to endure such a life-sapping experience and then find oneself in the midst of an inexplicable standing ovation of the kind that, it seems, Adelaide audiences will bestow on practically anything in the Festival. I seem to remember this habit from before Covid, but perhaps more than ever we’re merely glad to be in the presence of live performance again, if not quite sure what to ask from it, or even, yet, what to make of it. 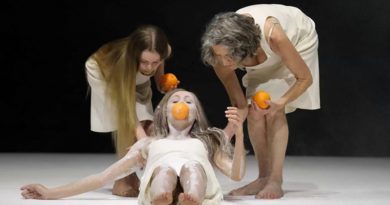 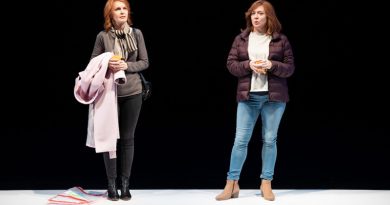 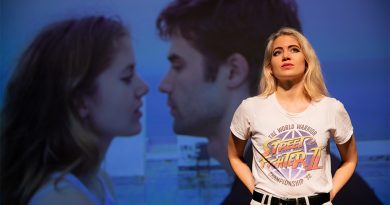 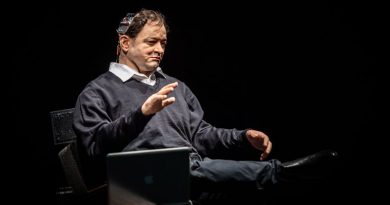 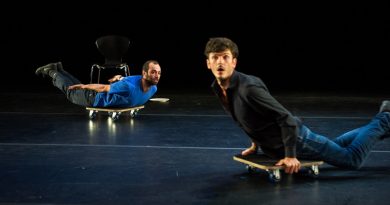 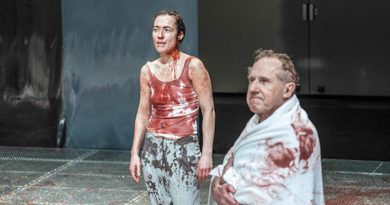